Yes, Venice Italy! I can’t believe I went there either!!!! I took a million pictures but I narrowed it down so that you wouldn’t have to look at all of them. 🙂

When we first arrived, we road in a water shuttle from the airport but, because I was so tired I didn’t take any photos.  We did ride on the Grand Canal, which is the main canal, in a water-bus a day later.  I got some great photos and here is my favorite.  (Yes, if you noticed I did make some of my pictures more vibrant but hopefully, they still look natural!) The Rialto Bridge is a pretty famous landmark and it was the only bridge that spanned the great canal for many years.  Thankfully now there are a few more bridges to span the canal but we still did not cross over from our side because it was so much of a hassle.

Here is a picture I took from the top of the bridge. Here are a few pics of the all famous gondolas. We didn’t ride in one but they were awesome to photograph from the many small bridges. 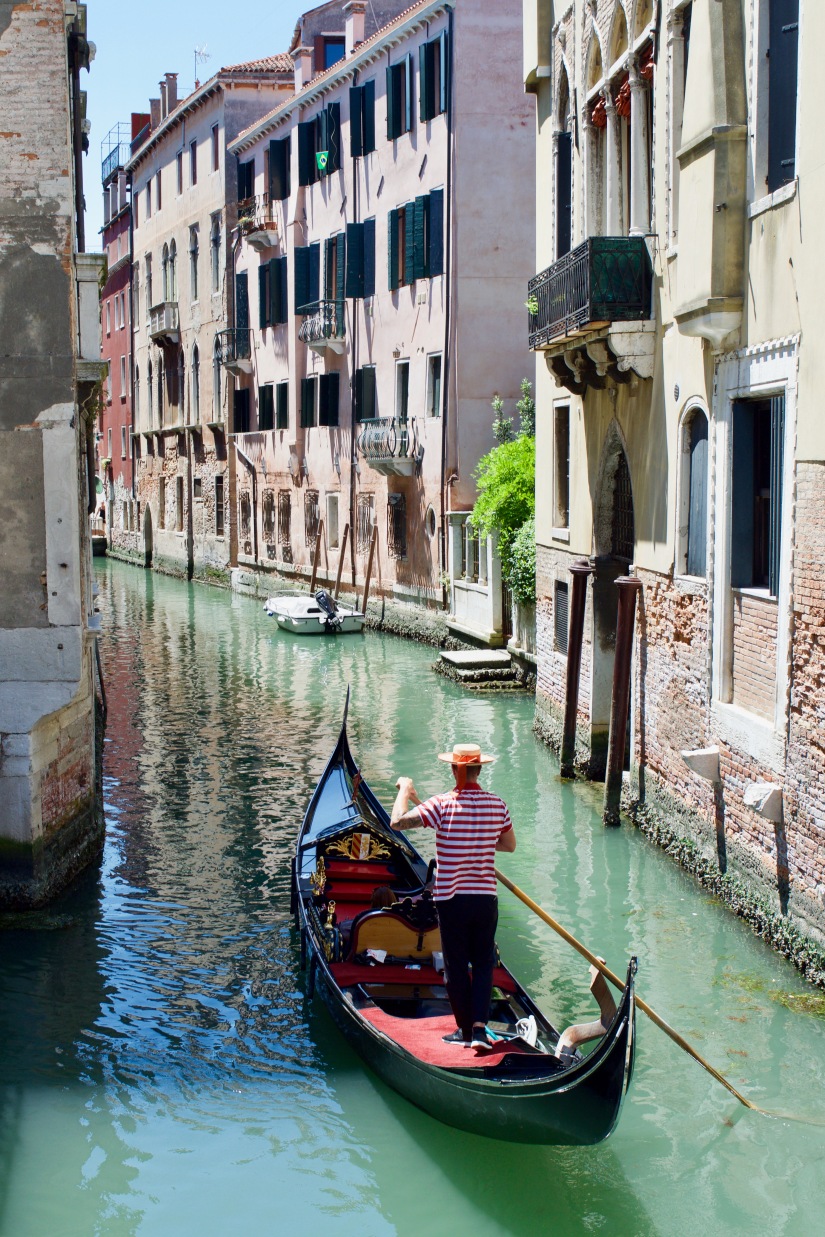 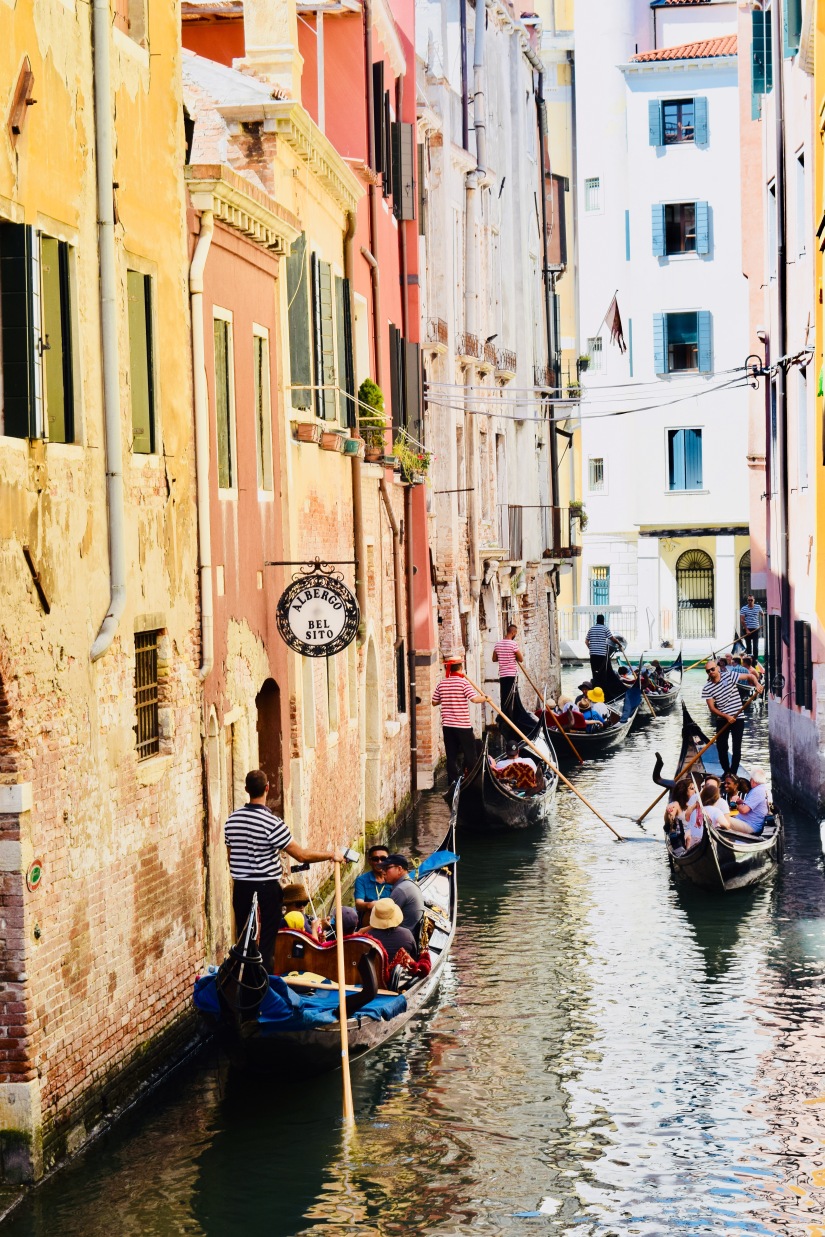 Here’s a pretty waterway near a huge church. 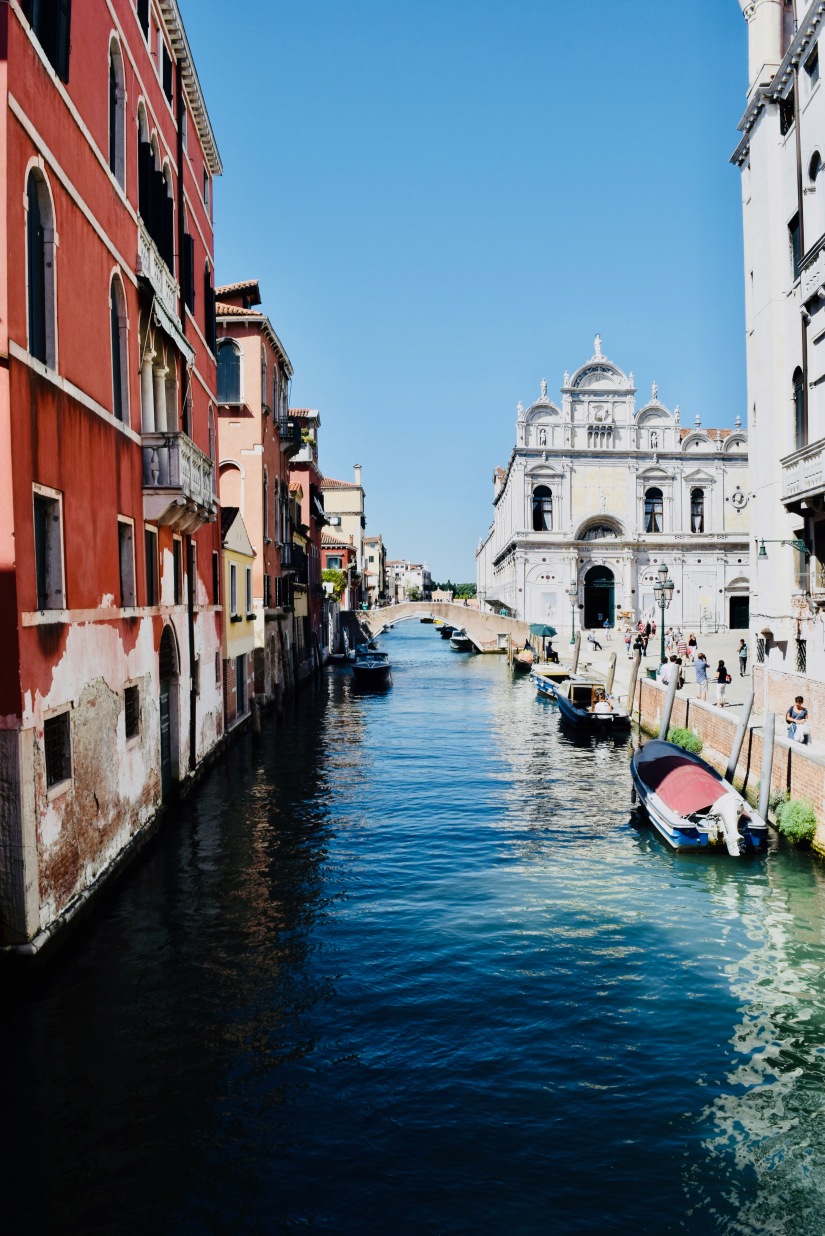 Venice is a city of waterways, but it’s also a city of super narrow alleyways!  I found the majority of the paths were actually narrow alleyways for pedestrians only.  Most are smaller than the one pictured below. 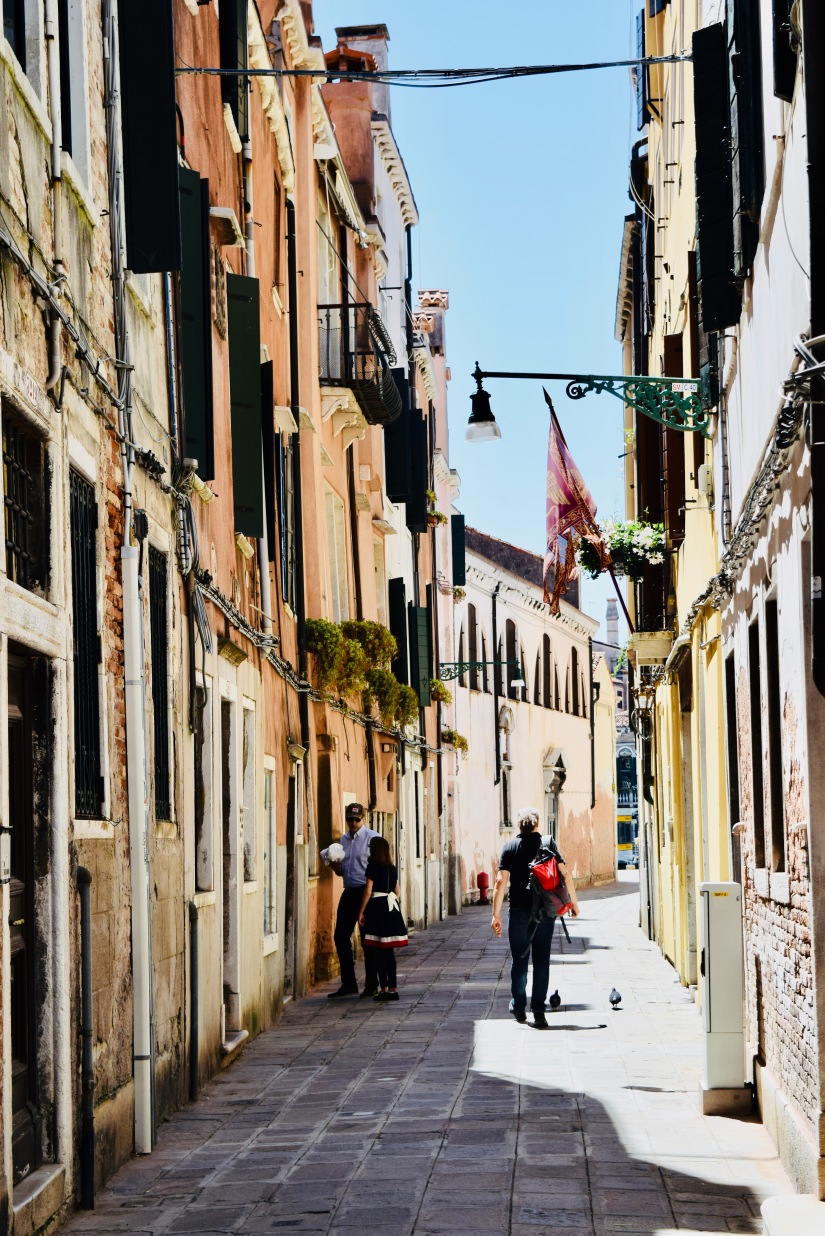 A few churches had interesting fronts. 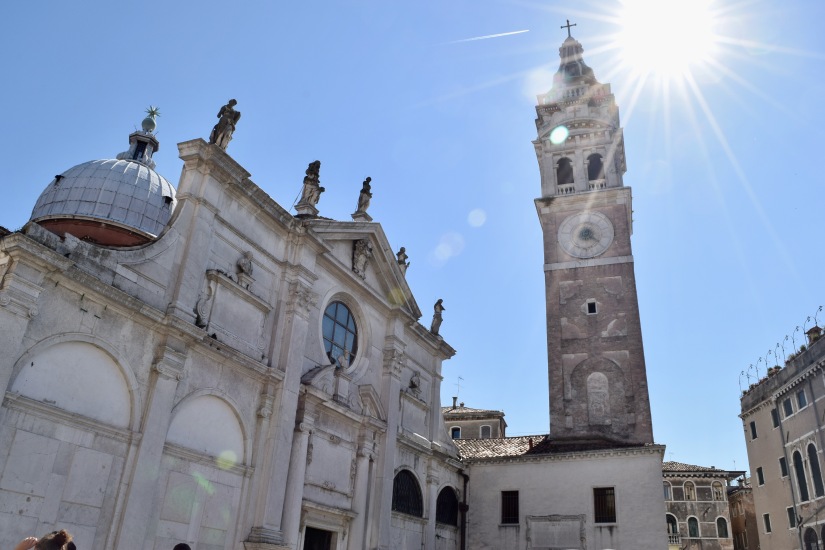 Venice also has a leaning tower! It’s really leaning so, I would not want to climb it. :-0 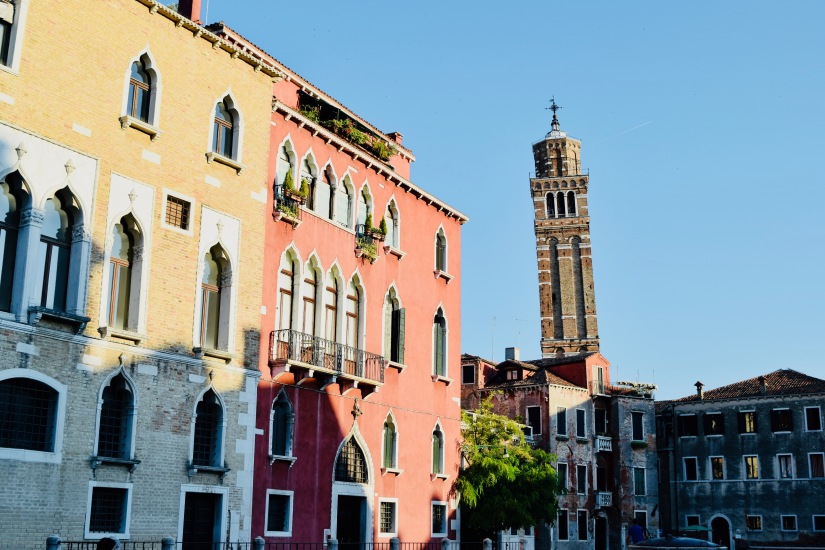 St. Marks square is full of tourists and pigeons.  I don’t really care for pigeons so we didn’t feed them.

The bell tower at one end, which you can walk under is really interesting.  On the top, not visible in the picture, there are two statues that move and bang a giant bell. 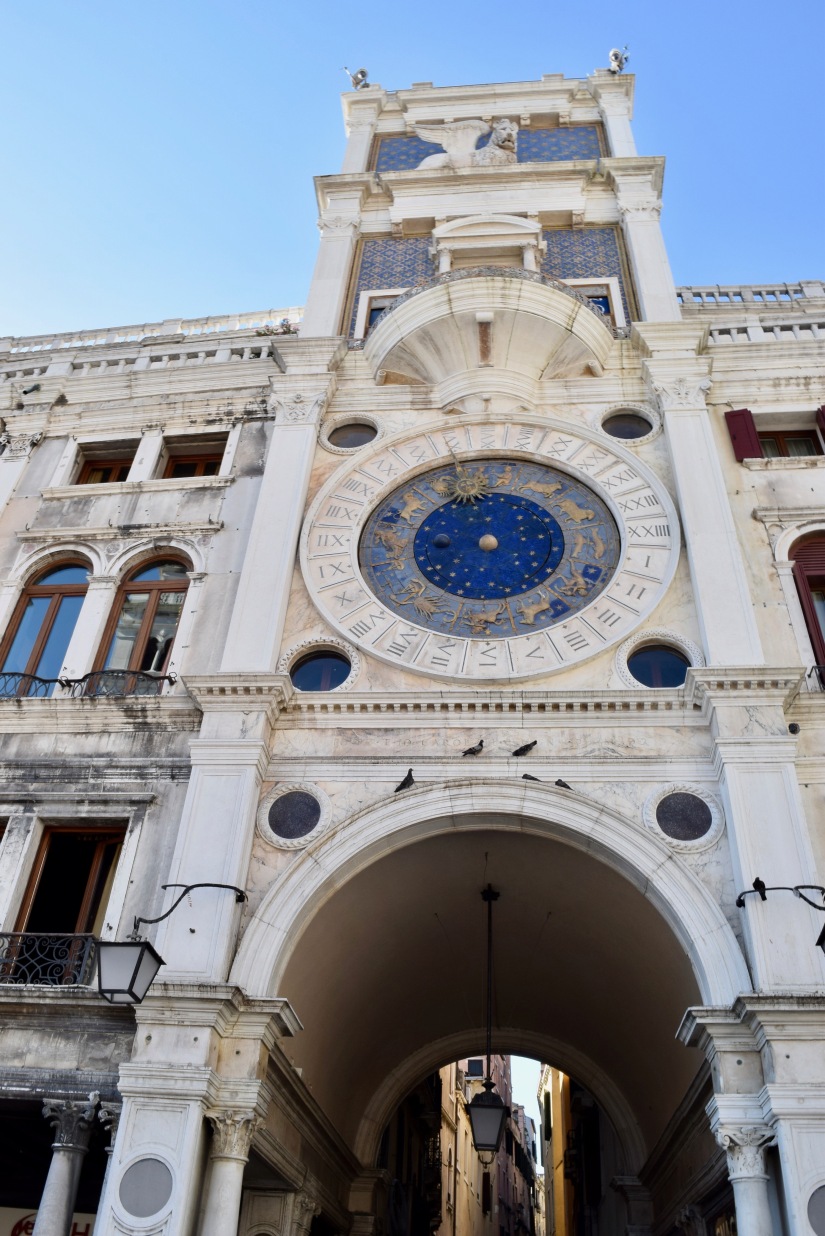 St. Marks church is a Byzantium style church and the ceiling is covered in gold leaf mosaics.  They are beautiful especially in the light but unfortunately, I wasn’t able to take any pictures.  I did get a picture of the outside. 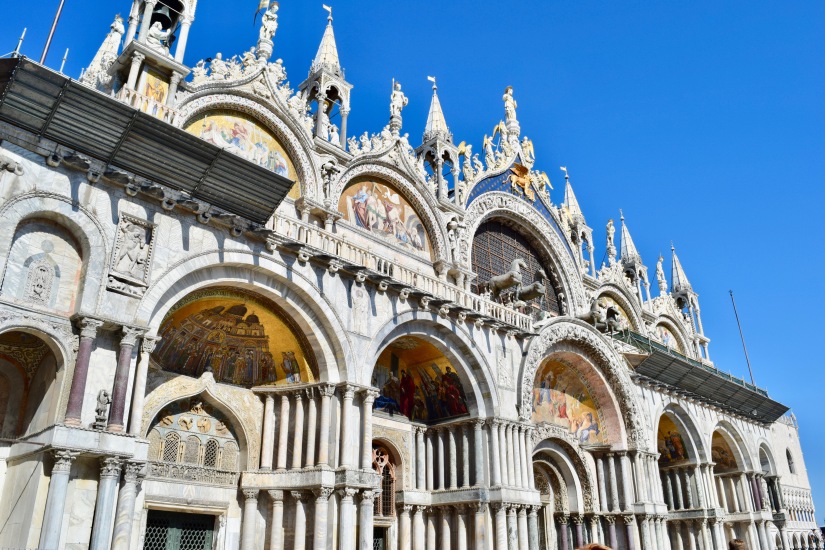 Here is the square at sunset. 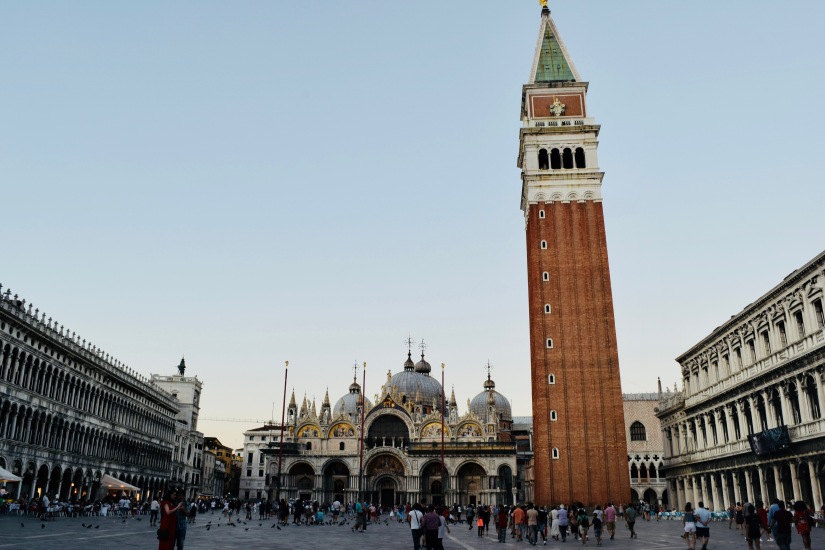 The giant tower was a watchtower so the Venetians could see approaching enemies in the old days because abound the 1300s it was the main trading port in the Mediterranean Sea.

Venice was a once in a lifetime experience that I will never forget! The unique atmosphere and roads will be forever picturesque in my mind!

Do you like the photos? Let me know in the comments below! 🙂 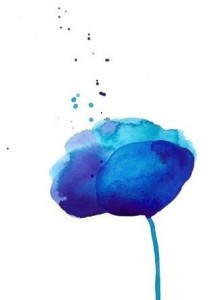 I’m Sapphire – a teen blogger who loves Jesus, reading, traveling, writing and photography! Thanks for stopping by!

Thou shalt not steal.  I own all copyrights to my pictures.